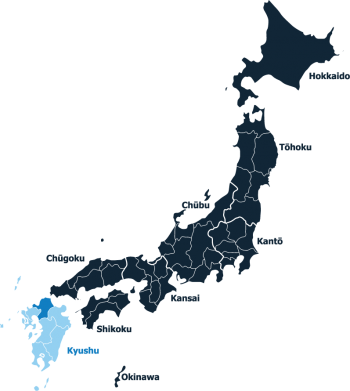 Kitaya was founded some 190 years ago during the Bunsei Era (1818 - 1830) in Yame City. Located in the south of Kyushu’s breadbasket on the Tsukushi Plains, the city is rich in nature and scenic beauty. Because Komeya (“rice shop”) was the original name of the family business, it is thought to have been a rice dealer before establishing the brewery.  It is now in its 7th generation of stewardship.

The three Japanese characters within the word “Kitaya” read “Joy”, “Many”, “Homes”, and to this day represent Kitaya’s corporate philosophy of “Spreading Joy, One Sake at a Time”. Also, because founder Saikichi Kinoshita was passionate about brewing he employed himself as the chief brewer, the family rule that “The Owner should brew the Sake” has been passed down through the generations.

In order to further improve the quality of our products, we built a new production facility in 1997 equipped with the newest bottling technology. This was all in an effort to produce the best top shelf Daiginjyo and Junmai ranked sake.